Disguised with colourful wigs and white face paint, crooks dressed as clowns have been carrying out bogus charity collections, vandalising property and even armed robberies. Police on Merseyside dealt with 14 incidents involving people posing as clowns in the past two years – and most were no laughing matter. One of the red-nosed crimes was caught on camera, when a robber dressed as a clown walked into a Walton shop in July to demand cash.

The thief strolled into a currency exchange shop wearing a yellow wig, white face paint and a pink prosthetic nose and forced a terrified worker to hand over bundles of notes. Other reports were made to police by victims of an armed robbery at a city business premises, telling how the perpetrator was dressed as a clown, and an attempted armed robbery at a shop where a man was wearing a “clown mask”. There were several calls from people suspicious of men in clown outfits collecting for charity, while one victim suffered racial abuse from a group of people – one of whom was dressed as a clown. 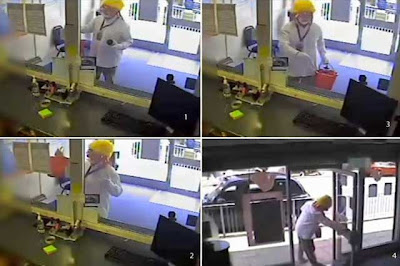 Another victim had an egg thrown at his car by a yob wearing a clown mask. During 2014, officers investigated four crimes committed by the costumed crooks. In St Helens in May, a man dressed as a clown followed a child who ran away in terror before telling an adult. In July, police investigated the horror ordeal at the Cheque Centre in Walton, before dealing the following month with a clown conning cash through a bogus charity collection. And in October, police were called out after a clown was seen knocking on windows of homes in St Helens.

Professional clowns have condemned the more sinister incidents, which they fear are giving their occupation a bad name. Tony Eldridge, secretary of Clowns International, said: “The clowning profession can do without stupid people who don’t understand the profession and appreciate it is a performing art and not a spontaneous jolly jape.” And Dave Tawney, European director of the World Clown Association, added: “Professional clowns and children’s entertainers seek only to create fun and enjoyment for their audiences and it is regrettable when persons dressed as clowns carry out anti-social behaviour.”
Posted by arbroath at 6:01 am
Email ThisBlogThis!Share to TwitterShare to Facebook