A woman from Maryville, Tennessee, escaped serious injury on Friday morning after facing the dilemma of remaining in a burning house or seeking refuge in the freezing cold. When Blount County firefighters were dispatched to a fire alarm call at 1:43am they didn’t yet realise the homeowner was still inside the structure. Blount County Fire Capt. Jerry Phillips called the house several times, and eventually got in touch with homeowner Rose Creech. “He could hear a fire alarm beeping in the background and she was coughing,” said Blount County Fire Lt. Tim Ogle.

“He asked her if she was okay, and she told him, ‘My kitchen’s on fire.’ And as soon as she said that he lost contact with her.” Phillips was able to get Creech back on the line and discovered she was still inside the home. Phillips told Creech she needed to leave the residence, but she replied that it was too cold to leave, Ogle said. Phillips begged the woman to leave the home, but when Blount County Firefighter Richie Storie arrived, he discovered she was still inside. As Ogle explained, when Storie arrived, the garage door was open. He walked through and found an open door which led into the home. 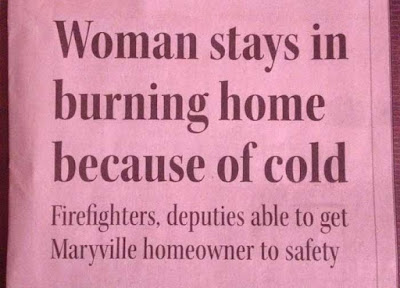 “He encountered black smoke,” Ogle said. “Thick, dense, black smoke, almost all the way to the floor.” Storie had heard that Creech was still inside, so he yelled inside the home and she responded. The firefighter, who had arrived in his own vehicle without an air tank, asked if she could make it outside. But because of the thick smoke, she was unable to see well enough to do so. Storie tried to lead her out with his voice, and Creech eventually found her way out another nearby door, where deputies from the Blount County Sheriff’s Office were waiting. Ogle said they were able to help Creech down to a neighbour’s house, where they waited for an ambulance.

As for the fire, firefighters were able to contain the blaze to the kitchen. There was still heavy smoke damage throughout the home. But because of the cold, all the water firefighters were using was freezing, Ogle said. “Not only was our water freezing outside anywhere that it hit the ground, but the water that we sprayed in the kitchen on the vinyl flooring was freezing on the floor,” Ogle said. “We were ice skating around that house.” It appears the fire started on or near the range top of an electric stove in the kitchen, Ogle said. Creech was transported by Rural/Metro Ambulance Service to be treated for smoke inhalation. She did not suffer any burns or major injuries, Ogle said.
Posted by arbroath at 6:06 am
Email ThisBlogThis!Share to TwitterShare to Facebook