A 36-year-old woman has been arrested for allegedly scattering nails on a main road in Hua Hin, northern Thailand, in an effort to bring more business to her husband’s tyre repair shop.

After receiving regular complaints about burst tyres since January, police took to the streets as undercover garbage men and spotted a woman spilling nails while riding a motorcycle. 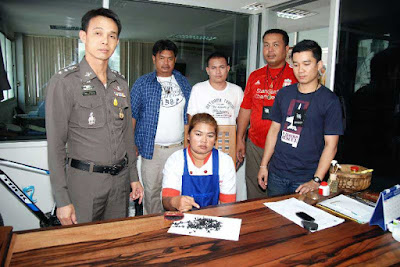 Officers arrested the woman, identified as Kesarin Channiem. According to police, Kesarin said her husband’s tyre business had fallen on hard times, and that the nails were an effort to bring in more customers.

Police have charged Kesarin with damaging property, and urged other motorists affected by the nails to come forward and press charges.
Posted by arbroath at 6:03 am
Email ThisBlogThis!Share to TwitterShare to Facebook