A man from Burnsville, Minnesota, has been charged with burglary after police say he broke into his neighbours' home to take back a Christmas gift because “they did not appreciate it.” Burnsville officers were called to a home after a woman said her neighbour, 54-year-old Alfred Joseph Guercio, had forced his way into her home. 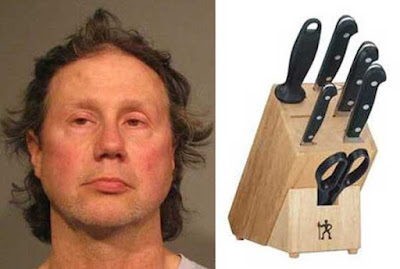 The woman told police Guercio went to their home around Christmas and gave them a knife set, which they placed on top of their refrigerator. On March 11, she said Guercio rang their doorbell, and he got into an argument with her about the knife set. He said he was upset that she didn’t appreciate the knife set and wanted it back. 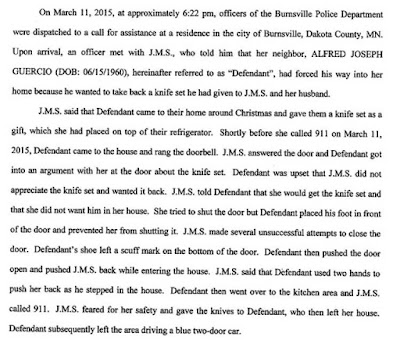 The woman told Guercio to stay there and that she would get him the knives, but she said Guercio forced his foot in the door and wouldn’t let her shut it. She said Guercio pushed his way into the house and got the knives. Guercio then left in a car. Police say they later spotted his car and stopped him.

Guercio told police he gave the knife set to the woman and her husband and was upset that she wasn’t using them “in the way they had agreed for her to use them,” according to the criminal complaint. He said he went inside the house because he felt like she wasn’t going to get the knives.
Posted by arbroath at 6:05 am
Email ThisBlogThis!Share to TwitterShare to Facebook