A mother has branded her son's primary school "ridiculous" after it linked his hairstyle to drug-taking. Joe Head, 11, wore his hair in a short ponytail in tribute to Swedish footballer Zlatan Ibrahimović. But Pope Paul Catholic Primary in Potters Bar, Hertfordshire, said in a letter the style was "unsuitable" and "associated with drug-taking". 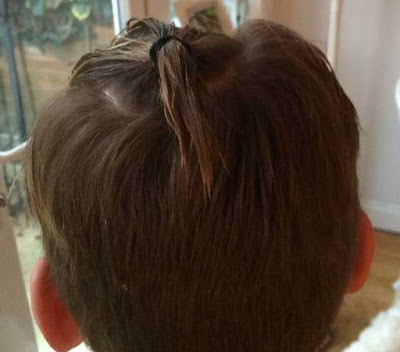 The school apologised for any upset caused and said would be happy to discuss the matter with Joe's parents. Mother Mandy Head said her son brought the letter home two days after he began wearing the ponytail. In it, head teacher Helen Lines said she did not feel the style was suitable for school, and she was "given to believe [it] is associated with drug-taking".

Mrs Head said at first she had thought the statement was "so ridiculous" she had found it funny. "But afterwards I became upset that she could associate drug-taking and my son in the same letter and it became offensive," she said. "I'm not aware of any rules for hair at the school. We will discuss it with them, but they didn't have to add drug-taking into the letter." 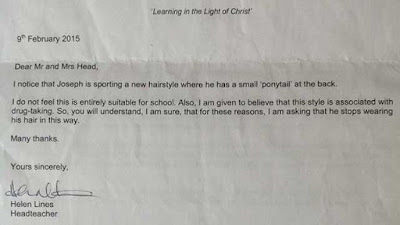 Mrs Head said Joe went back to school without the ponytail the next day, as requested in the letter. She said she had contacted the governors about the letter, but not the head teacher Helen Lines. In a statement, Mrs Lines said: "The school sent a polite request to Joseph's parents regarding his appearance. I'm sorry if this letter has caused any unintended upset and would be happy to discuss it with the parents directly."
Posted by arbroath at 6:00 am
Email ThisBlogThis!Share to TwitterShare to Facebook

I hate teachers. They were useless when I was in school and I doubt they have changed much. Teachers are there to teach, not to make comments about your clothes or hair.