Woman reaching under bed for her cats grabbed burglar instead

A woman in Florida searching for her cats reached under her bed was startled to find a burglar hiding underneath, according to a police arrest report. It happened on Tuesday at a home in Palm Springs. A stranger was knocking on residents' doors, drawing the suspicion of a neighbour who phoned the police. 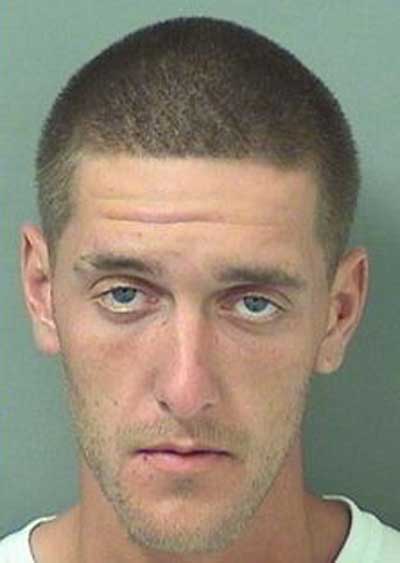 The neighbour watched the man walk toward the rear of a residence, according to the report. Inside that home, a woman was searching for her two cats. As the woman reached under her bed, she "felt she had touched human skin," an officer wrote in the report. "The suspect was hiding under her bed."

That caused the man, later identified as Christian Vatovec, 25, of Lake Worth, to sprint from the home and jump a fence before running away, police said. Police responded to the neighbourhood, and an officer visited the residence where the burglar had been. The woman said a gold ankle bracelet and digital camera were stolen.

Officers found Vatovec near a canal and took him back to the burgled home, where the woman identified him as the burglar. Vatovec faces burglary, grand theft and resisting arrest charges. He was booked into Palm Beach County Jail, where he was held in lieu of $53,000 bail.
Posted by arbroath at 6:07 am
Email ThisBlogThis!Share to TwitterShare to Facebook