A man wearing a ‘Scream’ mask and no socks or shoes made his getaway on a children’s scooter after raiding a bookmakers. The robber struck at Ladbrokes in Kenton, Newcastle upon Tyne, at around 5.45pm on Sunday.

He demanded money from staff before fleeing on a children’s scooter with cash in a Tesco bag. No one was injured in the raid and no weapon was seen. 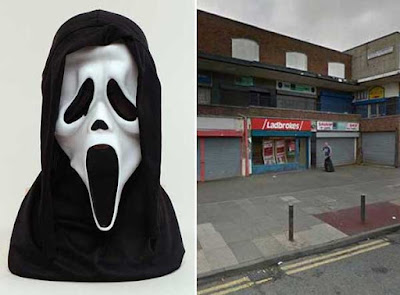 A Northumbria Police spokesman said: “Anyone who was in the area and who may have seen or heard anything suspicious is asked to contact police.”

The offender is described as around 5ft 8ins tall, of slim build, aged late 20s to early 30s, wearing gloves and a ‘Scream’ mask. He was not wearing any shoes or socks and made off on the scooter.
Posted by arbroath at 6:00 am
Email ThisBlogThis!Share to TwitterShare to Facebook