Boy rescued after getting stuck in claw machine

Four-year-old Henry Howes got stuck inside an arcade claw machine after climbing in when he failed to win a Minion teddy. 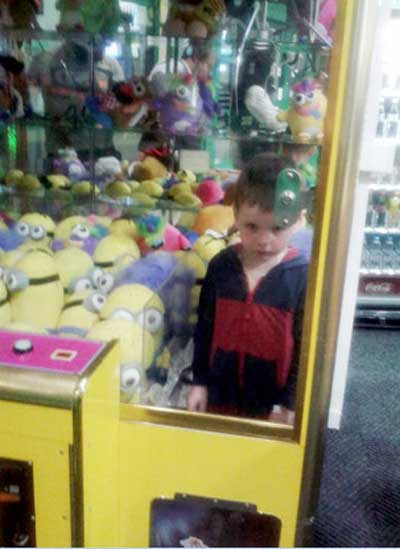 Determined Henry asked his mother Emma for £1 to have a go on the arcade game at his local swimming pool. The claw picked up a Despicable Me toy but then agonisingly dropped it just short of the delivery chute.

Henry refused to give up and put his hand inside the hatch in a bid to grab the Minion teddy, but reached too far. His bottom slipped under the trap door on the front of the machine, trapping him inside.

The drama was witnessed by older brother Harvey, nine, who ran to get Emma. She saw the funny side and called staff at the Snowdome in Tamworth, Staffs, who then spent half an hour looking for the keys to free Henry.
Posted by arbroath at 6:00 am
Email ThisBlogThis!Share to TwitterShare to Facebook

Did he get a Minion?

If you watched the video, you would see that he did get a minion.