After years of terrorising plant life in the Brighton neighbourhood of Boston, the so-called "Tree Ninja" has been apprehended. Boston Police observed a man "damaging a tree with a hammer."

For several years, someone has been engaged in periodic botanical brutality, killing or damaging young trees that were planted in Brighton. Flyers posted in the neighbourhood have warned residents about the “master of evasion”. 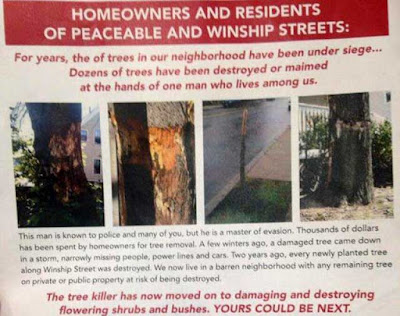 “The tree killer has now moved on to damaging and destroying flowering shrubs and bushes. YOURS COULD BE NEXT,” the poster reads. Over the past few weeks, detectives have been gathering video evidence. They set up surveillance in the area of the Brighton Elks Club to try and catch the culprit.

On Wednesday, police say 65-year-old Joseph Rizza showed up and began attacking a tree. As detectives approached him, they say Rizza tried to hide a hammer he’d been using, but it was too late. Rizza has been charged with five counts of willful and malicious destruction of property.
Posted by arbroath at 6:03 am
Email ThisBlogThis!Share to TwitterShare to Facebook

Why on earth would anyone do that? Is this a new kind of craziness?