Authorities in Australia are searching the Gold Coast after a South American boa constrictor was released by Queensland police officers who wrongly believed it was a harmless python. Police were called to The Esplanade at Surfers Paradise on or about March 26 to respond to reports of a large snake spotted at the base of a tree on a footpath. The officers released the reptile into bushland at the Southport Spit, but the incident has since sparked an operation by Biosecurity Queensland officers who said the snake was not a harmless python after all.

The reptile was identified as a two-metre South American boa constrictor, a large predatory snake that could pose a threat to other reptiles and even domestic pets. Biosecurity Queensland officer Duncan Swan said a team of 12 State Government and Gold Coast City Council officers were scouring the Southport Spit for the reptile. "In the wild these things tend to move no more than 100 metres a night – they are a nocturnal snake so we are reasonably confident that it is still in that general area," he said. "But that said, trying to find a snake in a reasonably heavily vegetated area is very, very difficult." 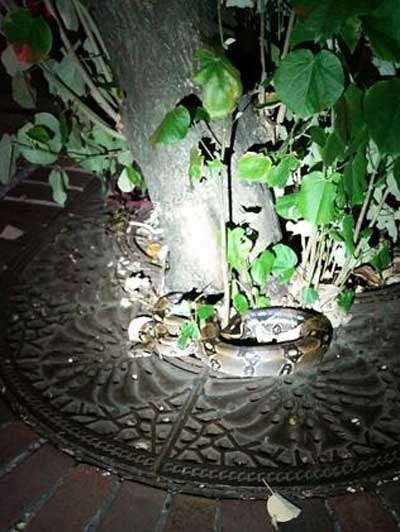 Snake catcher Tony Harrison said boa constrictors were similar in appearance to harmless pythons but posed a range of threats to the wider environment. "It has a couple of things it could potentially do - firstly it could introduce viruses to Australian species, and therefore wipe out the Australian population of reptiles," he said. "It can also start to breed if it's pregnant and it drops a clutch of babies, and all of a sudden, bang - they establish here in Australia. They will be competing for other snakes that already naturally live here in Australia and potentially some exotic species eat reptiles as well, so that can be an issue.

"They eat anything with fur and feathers, and they can eat three times their girth, so it's a potential threat to any of our furry or feathered friends." However, Mr Harrison said he was confident the snake would be found. "It's a needle in a haystack plus some - the best way to for us to actually land the snake and I don't think it'll be a problem and we will get it within a month - is basically, it's just the public's eyes," he said. "They don't travel too far and especially being a captive-bred animal or an animal that's been kept in captivity, it's probably just very slowly cruising around, doing its thing and exploring what its new environment is. It won't be too long until a member of the public stumbles across it and calls one of the authorities and it gets caught quickly."
Posted by arbroath at 6:03 am
Email ThisBlogThis!Share to TwitterShare to Facebook