Man surprised by 15 feet high flames shooting out of pavement

A man walking to his local takeaway for a burger was nearly flame grilled himself after a massive fireball repeatedly erupted 15ft out of the pavement. Shiraz Nawaz, 36, was on his way to the Dixie Chicken shop on Stratford Road in Shirley, Solihull, on Monday evening when he heard buzzing from the ground just a few feet behind him. 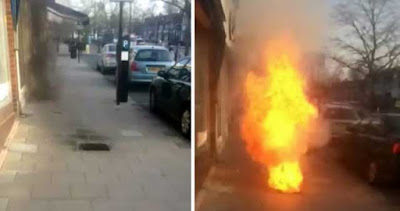 He turned around just in time to see a massive plume of thick black smoke followed by huge orange flames shooting up from an open manhole. He managed to grab his phone just in time to film the incident. Nobody was hurt in the incident after Shiraz evacuated the nearby takeaway, told them to turn off their gas supply, and called the fire service. 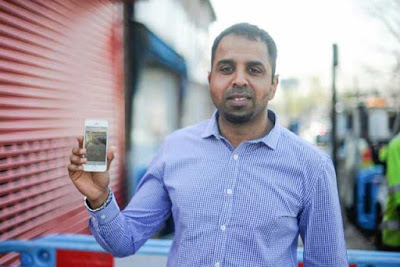 Firefighters extinguished the blaze, which they said was caused by a fire in an underground link box, which distributes electricity, below the manhole. “I’ve never seen anything like it, and I have been in the building trade,” said Shiraz. “The guy in the shop grabbed me a couple of burgers after everything, so I guess it had a happy ending.”

A spokesman for West Midlands Fire Service said: “It involved a fire in an underground electrical link box. The electrical supply was isolated by Western Power. Power was isolated to surrounding homes and premises for four hours. Three people were evacuated from one of the properties. We used a CO2 extinguisher and a hose real with foam, because it was an electrical fire. It was accidental.”
Posted by arbroath at 6:00 am
Email ThisBlogThis!Share to TwitterShare to Facebook

Mr. Nawaz also said that, since that day, his constipation problems seem to have evaporated.

(Not poking fun at the guy, but man, I'd've had to have changed my shorts after a near-miss like that.)