Being a postman, Chris Kitchen is used to delivering packages of all shapes and sizes. But he had a surprise delivery of his own last week when he got home from work to discover a cockerel named Humphrey had set up home in his back garden in Driffield, Yorkshire. "I had gone to let the dog out in the back garden when I noticed the cockerel," Mr Kitchen said. 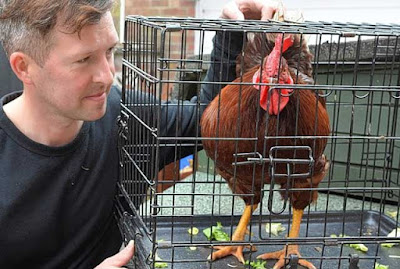 "I went to investigate and noticed straw bales and a big chicken shed. Then I found a cereal container with food in it labelled Humphrey. I was just scratching my head, I didn't know what to do." Mr Kitchen phoned his fiancé Sam and his other friends to see if he had fallen foul of a prank, but none of them knew anything about Humphrey. He then discovered a note in the rooster's pen from his "owners", named Andy and Sarah, thanking him for looking after the cockerel. 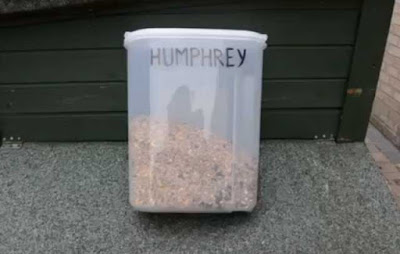 The note reads: 'Thanks again for looking after Humphrey. We have left him in the garden as discussed. He will need one cup of feed per day and water. I think we covered everything else last week. We arrive home on the 24th, so we will come and pick up Humphrey that afternoon. Any problems, just call us. Thanks again. Andy and Sarah.' "I am just baffled by it all," Mr Kitchen said. 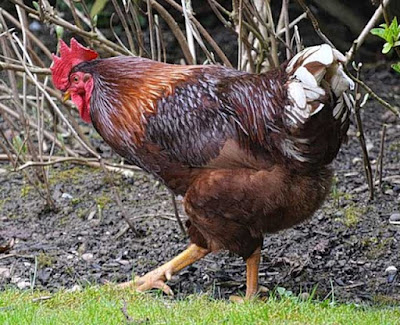 "In the letter, they tell me they will be back off their holidays next Friday to pick Humphrey up, so we will just have to see what happens." Humphrey is now being cared for by a friend of Mr Kitchen's, Annette Guy. Mrs Guy used to keep bantam chickens and is making sure Humphrey is cared for until his owners return. "He was up at 5.30am waking everyone up," she said. "He is a right character and you can tell that he has been looked after by whoever does own him."
Posted by arbroath at 6:01 am
Email ThisBlogThis!Share to TwitterShare to Facebook