Police in Florida apprehended a man on Wednesday suspected of stealing a Good Humor ice cream cooler from a gas station in Oakland Park, Broward County. 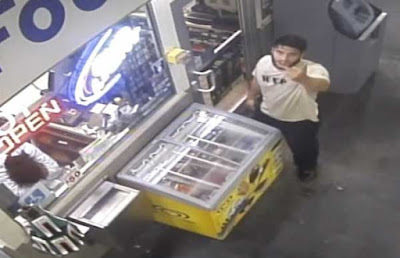 Dennis Norman, 25, who moments before the robbery looked up to extend his middle finger at surveying cameras, was arrested and charged with grand theft. Surveillance footage shows a “swaying and spitting” Norman walking into the store on April 2 at 4:09am through the rear parking lot. 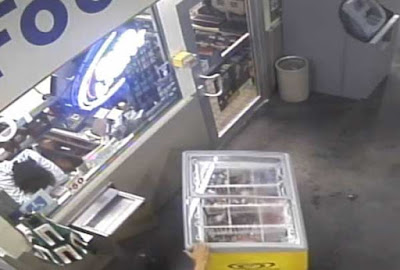 After minutes of browsing around, Norman noticed the gas station attendant, Beauvais Guisman, sleeping behind the counter. Norman then cautiously pushed the ice cream cooler away from the register and from a sleeping Guisman, who was just inches away behind a window.

Approximately 15 minutes later, Norman pushed the cooler, valued at $2,500, through the store’s doors. Police believe that Norman fled the same way he entered the store, on foot. Details leading to Norman’s final arrest are not available but police say they had reason to believe that he was a member of a nearby gym and lived in the area.
Posted by arbroath at 6:06 am
Email ThisBlogThis!Share to TwitterShare to Facebook