A man who made sexually suggestive comments through the letterboxes of two women before stealing a pair of knickers is being hunted by police. The knicker thief struck at around 2am on Saturday, when women at two separate houses in Hapton, Lancashire, were disturbed by him banging on their doors. Police said the man made the comments through the letterbox after they refused to open up to him before stealing a pair of knickers from one of the victim's washing lines.

Officers said he was wearing dark clothing, although detectives investigating the 'unusual incident' did not have a more detailed description. Patrols have been stepped up in the area in a bid to reassure the public and to try and find the person responsible. Cllr Joanne Greenwood, who represents the area on Burnley Council, said: "It sounds laughable but I'm sure it was very frightening and not funny for the two women involved. 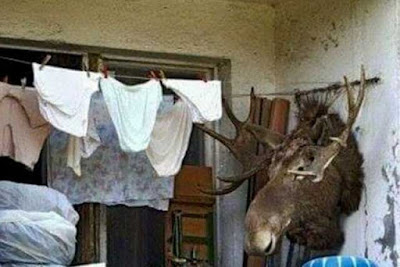 "It's really bizarre. It sounds almost funny but it's absolutely serious and not funny at all for the victims. I'm sure when the police finally track down this guy, they will find he has issues because to steal underwear is just odd." DS Alisa Wilson, from Burnley CID, is urging anyone who witnessed a man acting suspiciously in Hapton on Saturday to contact them. She said: "This is an unusual and isolated incident which has left the two women shaken and distressed.

"I believe the man responsible may have been in the area for some time and I am appealing for anyone who may have seen him loitering to make contact with police." Cllr Jean Cunningham, who also represents the area on Burnley Council, said: "This is quite a disturbing thing to have happened. It's not something that I have ever heard of happening before and it gives me great concern. I hope that the the police's investigation can be helped by anybody who can."
Posted by arbroath at 6:04 am
Email ThisBlogThis!Share to TwitterShare to Facebook

You must know how to write an application essay. visit this page to get this knowledge.