A female flier was removed from a Southwest Airlines flight on Thursday after allegedly jabbing another passenger in the arm with a pen. The passenger "was removed from the flight for poking her seatmate with a pen to stop him from snoring," Southwest said in a statement. But it's unclear whether snoring was the root cause of the incident. Michael Sutton said his friend, Lenny Mordarski, was asleep as Flight 577 was taxiing down the runway at Chicago's Midway International Airport en route to Manchester, New Hampshire, when a woman got agitated and stuck him in the arm with a pen. 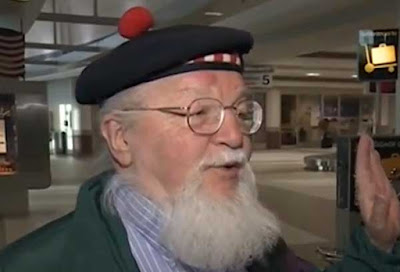 "I was right beside him the whole time. Didn't hear snoring," Sutton said. "I guess his arm kind of brushed over to her. And she just went nuts and started stabbing (him) with (her) pen," Sutton added. "He screamed really loud, almost like a little girl." Mordarski said he yelled out to get flight attendants' attention after feeling pain in his arm. "Imagine being asleep and then being stung by bees," he said, "and then waking up and going, owwww." The woman smirked afterward, Mordarski said, but remained silent. "All I wanted to do," he said, "was not (to) be sitting next to her."

Sutton and Mordarski were connecting through Chicago on their way back from a multimedia convention in Las Vegas. The pilot returned the aircraft to the gate, where the woman was removed from the flight. "We were escorted off, they questioned us, and they took her away," Sutton said. The flight, which was already delayed, took off for Manchester after the woman was removed. It arrived in New Hampshire nearly two hours late. "The passenger in question will be accommodated on a later flight," a Southwest spokeswoman said.

"No injuries were reported." No serious injuries, anyway. "Luckily he wore a thick long sleeve shirt or there would have been blood," Sutton said. "He will have a few bruises in the morning." By Thursday evening, Mordarski was smiling about the ordeal. He said it was unfortunate that it happened, but praised the airline for how the incident was handled. Sutton said Southwest treated them to free gin and tonics, and passengers cheered when they learned the woman wasn't coming back to the flight. "Everyone on the plane was happy afterward," Sutton said. "They were glad to get rid of her."
Posted by arbroath at 6:05 am
Email ThisBlogThis!Share to TwitterShare to Facebook