A woman from Marion County, Oregon, has been arrested after police say she struck a man on the head with a baseball bat, fracturing his skull. Haley Fox, 24, of Turner has been arrested and charged with Assault I. Police say the 26-year-old Alabama man began a relationship with Fox via the internet, sometime in 2013.

According to detectives, in April of 2015 he agreed to move to Oregon and live with her. On April 8th, he went to Fox's residence, to meet her for the first time in person. When he arrived Fox led him to a table outside of the residence where he sat down to drink wine. Police say Fox then asked the man to close his eyes. 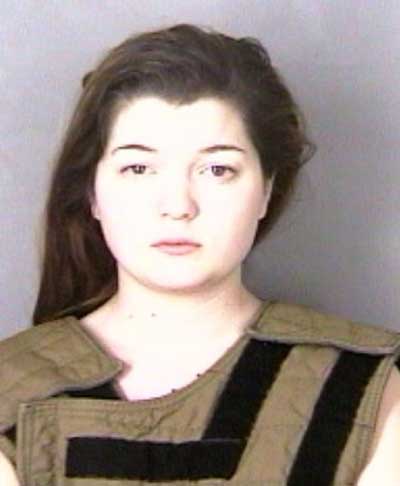 Detectives determined that while he had his eyes closed, Fox walked behind him and struck him on the head with a baseball bat. As a result of the attack the victim suffered cuts to the head that required staples and a fractured skull. Fox told investigators that she decided to hurt the man because she did not want to be his girlfriend.

During the assault investigators learned that an additional party was present and may have witnessed the assault. A 26-year-old woman has been interviewed and her exact involvement is still being determined, according to the report. On April 9th, Fox was arrested and later charged with Assault I. Since her arraignment she has posted bail and was released from custody. The Alabama man has been treated and released from Salem Hospital.
Posted by arbroath at 6:07 am
Email ThisBlogThis!Share to TwitterShare to Facebook

Wow, that is batshit crazy by any standard

What is she wearing in that picture?

Yeah, I'm going to have to go with Dunex on this one. Pure crazy.

As for the velcro vest get-up she's wearing, I'd like that explained too. I assume it is something the police put her in, but I don't understand why.