Red-faced officials of a panel in Jammu and Kashmir, northern India, that issued an admit card to a cow for an entrance test to a professional course said on Sunday they would file a formal complaint to the police to trace the prankster behind the incident. The Jammu and Kashmir Board of Professional Entrance Examinations became the butt of jokes when it emerged that it had issued an admit card to “Kachir Gaw” (brown cow in the Kashmiri language) for a test on May 10 to select candidates for a polytechnic diploma course.

The card said the applicant was the daughter of Gur Dand (bull). By Sunday afternoon, embarrassed officials of the board had traced the internet protocol (IP) address of the person who submitted the application on behalf of the cow. "This person has the turned the respectable institution of Board of Professional Entrance Examinations into a laughing stock. We have traced the IP address, which apparently is from south Kashmir's Anantnag district,” Farooq Ahmad Mir, the controller of examinations of the board, said. 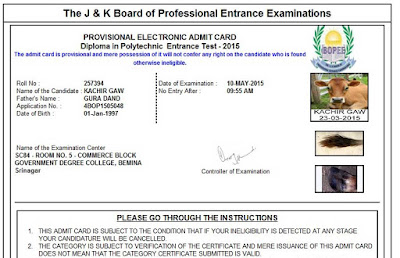 “It will be followed up by a formal First Information Report in the next two days since Monday is a holiday," Mir said. The lapse became public when Junaid Azeem Mattu, a spokesman for the opposition National Conference, tweeted images of the admit card, complete with a photo of a brown cow. Mir said that the admit cards were issued through an automated process. Though the process included image recognition software, it could not differentiate between a human’s face and an animal’s picture, he said.

"We want strict action against the person. Tomorrow, someone can play bigger mischief and hack our website. We have to create an example. We cannot afford to let him go without punishment. We are receiving mails and SMSs from people asking for action. We want people's faith in the institution to remain intact," Mir said. Mir, the board’s chairman and the law secretary worked through Sunday to address the issue. Education minister Nayeem Akhtar sought an explanation from the board. "Tomorrow we will conduct examinations for medical and other professional courses. We will be lynched if we don't establish our credentials as competent gatekeepers to hold such examinations," said Mir.

There's a news video in Hindi here.
Posted by arbroath at 6:05 am
Email ThisBlogThis!Share to TwitterShare to Facebook