Ramesh Patni, a cattle breeder from Kheralu in the Mehsana district of Gujarat, western India, was a desperate man on Thursday morning. Four of his herd of 40 goats who had become tipsy after drinking seized liquor bottles that had been destroyed by the police, were still unconscious nearly 40 hours of their drinking binge. However, when he took the drunk goats to the local veterinary clinic, they slowly came back to their senses. 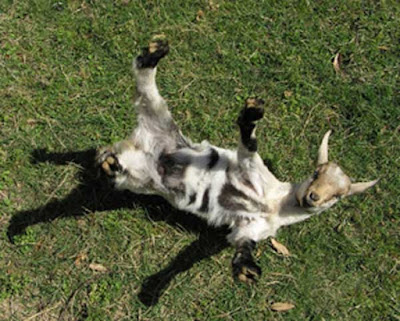 Patni's woes began on Tuesday evening when he found that many of his goats, who had been grazing on gauchar land in Kheralu, had become unconscious or were behaving strangely. Frantic enquiries revealed that just hours ago, Kheralu police had destroyed 11,500 bottles of liquor that were seized in the morning in the presence of police personnel. While police presence at the spot was removed three hours after the bottles were flattened by a roller, nearly 60% of the liquor was absorbed in the earth.

The goats had apparently drunk the liquor that had collected in puddles on the uneven land or seeped into the crevices of the earth. "I called for a handcart and took the unconscious goats home. Later, most regained consciousness but they were unusually boisterous. I rarely pack them in a cattle pen but that night I had no option. I lock them up for the night and kept them locked for the whole of Wednesday," said Patni. 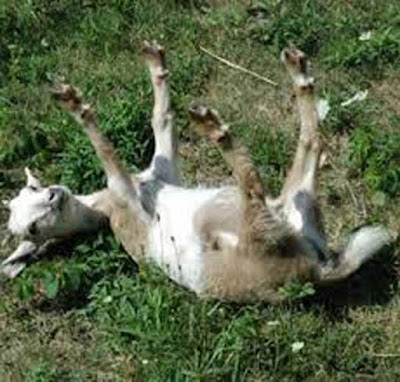 On Thursday morning, four goats had still not recovered from the hangover and had to be taken to hospital. Kheralu police inspector S H Bawa said they had come to know that goats had become tipsy after drinking liqour that had collected on the gauchar land. "We had left the place only after most of the liquor was absorbed in the ground but some of it must have seeped into the land," said a bemused Bawa. In the past, cows had got drunk after drinking from liquor destroyed by the police on the outskirts of Ahmedabad.
Posted by arbroath at 6:03 am
Email ThisBlogThis!Share to TwitterShare to Facebook

I always look forward for such nice post & finally I got you. Thanks for sharing this content.
CMS and ED
CMS ED Course

It’s in point of fact a nice and helpful piece of information. I’m glad that you simply shared this useful info with
us. Please stay us informed like this. Thank you for sharing Click Here
.

I follow your blog religiously. This is my favorite movie4me

Really enjoyed reading it. Keep up the good work Tamilrockers

You're doing a great job Man,Keep it up. Love your site. My thanks for doing such a good job. Ihemp flowers
cbd product

I found this article informative for me, I hope I will get more from this site in the future.
https://snowtica.com/

You're a good person

Its a great pleasure reading your post.Its full of information I am looking for and I love to post a comment that "The content of your post is awesome" Good work.
Autocad 2020 Crack
adwcleaner bleeping
advanced systemcare 12.5 key
how to defrag ps4
remo drive defrag crack
Clip studio paint crack
cableguys-shaperbox
kontakt-5-6-5-r2r
ableton-live-suite
kontakt-5-6-6-r2r

This is an awesome blog post. The author has used images that show an object in the sky as clouds. When I first looked at the image it did not look like a cloud, but it looked like a cloud. So the title of this post is This is Awesome Blog Post.

This is an awesome blog post. The author has used images that show an object in the sky as clouds. When I first looked at the image it did not look like a cloud, but it looked like a cloud. So the title of this post is This is Awesome Blog Post.
property for rent in abu dhabi with photos

Nice sharing thanks how to receive Adsense pin

Chimera Tool Premium Crack has its roots in humble beginnings – at first, it was just a small project where two engineering students worked as a hobby. Over the years our team has grown and we now have over 20 hard-working employees to make Chimera the best it can be.
Ozone 9 Advanced For macOS-v9-1-0 Serial Key Latest 2022 Free
Wondershare Mobiletrans Crack-8-1-5-Registration Code-2022 Free
UAD Ultimate 9 Bundle Crack

Thank you for taking the time to write such an in-depth post. You covered every possible angle. The fact that you can refer to different parts is fantastic. This isn't simply a skeleton; she's got "flesh on her bones."

Can I just say what a relief to discover somebody who genuinely understands what they are talking about on the net? You actually know how to bring a problem to light and make it important.

I really loved reading your Content I had a wonderful experience ❤ loved the good work but I'll really appreciate it, if you could check my site on My Blog