A man who put wire through chickens' beaks to keep them quiet has been convicted and ordered to pay thousands of dollars in fines. Yong Jin Kim, from the Glenfield suburb of Auckland in New Zealand, kept chickens in his backyard and used wire to keep their beaks closed, the North Shore District Court heard on Tuesday.

The court found he had caused the birds pain and distress and he was ordered to pay veterinary costs of $1000 and legal costs of $2200. He was also disqualified from owning any poultry for five years. The case was first investigated by the SPCA in April 2014, following complaints from members of the public. 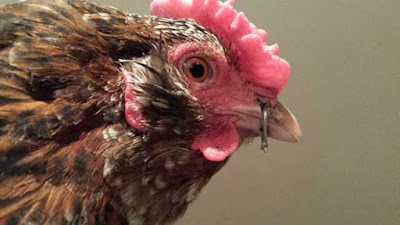 Kim told SPCA inspectors last year he pierced the wire through the beaks of two hens and one rooster "to make the birds quiet". He said he had done it two weeks before the chickens were seized by the SPCA. SPCA Auckland executive director Bob Kerridge said it was a "barbaric" measure that was totally unacceptable.

He said vet reports showed the birds suffered considerable pain during the procedure. "The wires caused nothing but distress to the chickens limiting their ability to feed and water. The chickens were in poor condition when we received them and gained a significant amount of weight after the wires were removed, confirming they were unable to get enough food with the wires in place." After recovering from their ordeal the chickens have been adopted to new homes.
Posted by arbroath at 6:04 am
Email ThisBlogThis!Share to TwitterShare to Facebook

The punishment is obvious. Two lip piercings and a padlock.