A mother from Warden Bay, Kent, says she was shocked to discover her son’s homework contained a question relating to violent robbery. The test sheet, for spelling, punctuation and grammar, required students to use “I” and “me” correctly in a sentence. Alex Garrod’s 11-year-old son Harry is a pupil at Eastchurch Primary School in Sheerness and was studying at their home when he alerted her to the question. Ms Garrod said: “He was sitting at the table doing his work when he said, ‘Oh my God, look at this’. I was shocked. I thought, ‘Am I reading this correctly?’” 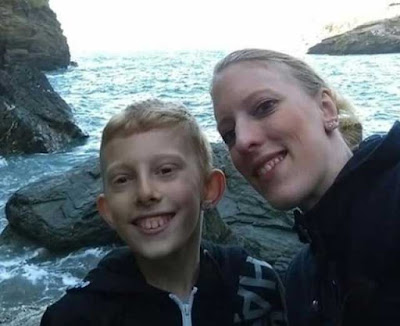 The sentence, which included gaps for the insertion of the correct grammar, read: “Hand ... the money before ... put a bullet through your head.” Ms Garrod, 29, said: “Because Harry had to put ‘I’ and ‘me’ in the sentence it was as though he was writing as himself. There’s thousands of more appropriate sentences they could have used for the test. Teachers are really busy, and proofreading homework sheets isn’t something they should be doing as these are pre-prepared test sheets. Afterwards, I did explain to Harry that you don’t need to be putting bullets through people’s heads to get money. He was like, ‘I know that Mum’.” Ms Garrod said the test was preparation for her son’s SATS exams next week.

She said: “I’m not a parent that gets in a flap about it affecting Harry. He’s quite clever, but it’s still an inappropriate question for a child to answer. What with the uproar over violent video games, parents don’t need to be worried about their children’s schoolwork as well.” Ms Garrod said her angst over the sentence was relieved somewhat when the youngster attempted to tackle a later question, which read: “When I asked the Scotsman if he enjoyed haggis, he looked at me and said ‘Och ...’” Ms Garrod said: “I’m not sure if we should even know the answer to that.” The school has since apologised that the paper was not checked by staff before being given to pupils. 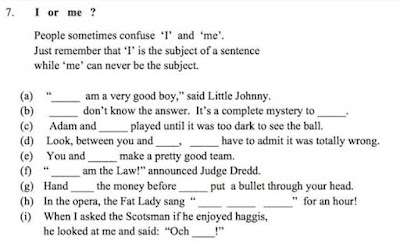 Headteacher Sarah Hunt said: "We are sorry this has happened. The homework exercise was taken from a Times Educational Supplement site providing teaching resources, which is normally a very reliable facility used by thousands of teachers across the country every day. Unfortunately this particular piece of work was not checked thoroughly before being sent home with the children, and we are sorry that this has caused concern with the family. Our school encourages parents with any concerns about their child's education to come into school for a chat with their teacher or, if they prefer, myself and we are disappointed that the parents did not do so in this case."
Posted by arbroath at 6:01 am
Email ThisBlogThis!Share to TwitterShare to Facebook

You have to admit it got the kid's attention.

(i) better be a trick question, because the answer is "aye" not I or me.