The Pike County sheriff in Kentucky obtained arrest warrants on Friday after a video was posted online showing a man wearing nothing but shoes, socks and a Halloween mask running through Walmart, pouring milk on himself and yelling that he was on fire. 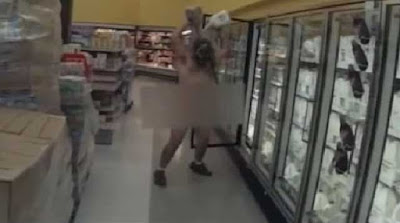 Sheriff's deputies said they plan to arrest Timothy Smith of Phelps and David Daniels of Belfry in connection to the incident at the Walmart in South Williamson. The video went online on Wednesday night but YouTube removed it because it showed nudity.

"I wouldn't want to go in Walmart and see somebody walking around naked or running around naked, so they need to go to jail," Pike County Sheriff Rodney Scott said. He said the streaker and camera operator are both guilty of indecent exposure.

Scott said the crime of indecent exposure has to be taken seriously, adding: "If we don’t then it could be happening all the time. So that’s why it’s important to go ahead and make the arrests". Sheriff's deputies are also trying to track down the getaway driver, who waited for the streaker to get into a car before driving away.
Posted by arbroath at 6:06 am
Email ThisBlogThis!Share to TwitterShare to Facebook