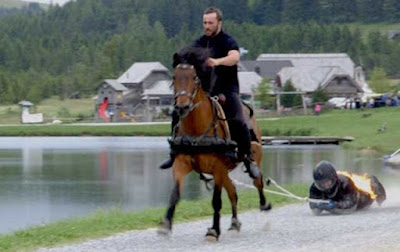 Both while on fire. The stunts required meticulous training and preparations. Tödtling armored himself with iron plates on his elbows and knees, then was swaddled in layers of protective clothing and fireproof gel. 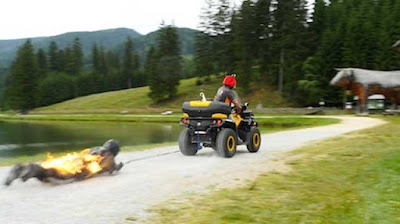 He then held on to a rope which was then dragged along by a horse at full gallop, for a distance of 500m, having been doused in accelerant and set alight by his stunt coordination team.

After travelling nearly half way around the scenic Teichalm mountain lake, Joe then reversed direction, holding on to a tow rope being dragged by a quad bike. Joe has said that these are to be his last attempts at world record stunts, after a long conversation with his wife.
Posted by arbroath at 6:02 am
Email ThisBlogThis!Share to TwitterShare to Facebook