A cheese covered shirt and a trail of snacks implicated an Iowa City man in a Friday night burglary.

Iowa City police were called to the Creekside Market at around 11:20pm for a report of a burglary. Responding officers discovered 20-year-old Francisco J. Munoz about 100 yards from the convenience store carrying two cases of beer. 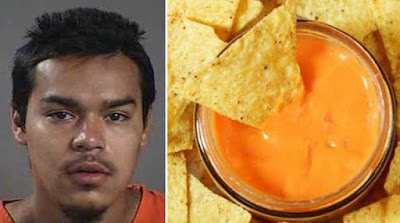 Police said Munoz’ shirt was covered in nacho cheese and there was a trail of snack foods and lottery tickets between him and the store. Munoz had bloodshot, watery eyes and showed other signs of intoxication, police said.

A post-arrest breath test showed Munoz had a blood alcohol content of .270 percent. Munoz used a brick to smash the entry door of the convenience store, causing $1,000 in damage. He was arrested and faces charges of third-degree burglary, second-degree criminal mischief and public intoxication.
Posted by arbroath at 6:07 am
Email ThisBlogThis!Share to TwitterShare to Facebook