Cameras on the Flagler Bridge in Palm Beach, Florida, captured a driver, identified as 29-year-old James Montano, jumping the bridge as it was going up. Police say the jump was not the act of a daredevil, but more likely distracted driving. 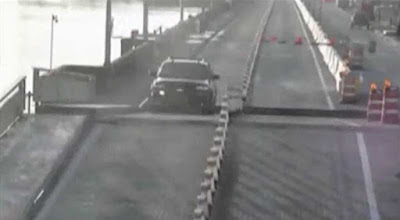 “Basically it was a distracted driver incident,” explained Officer Philip Salm with the Palm Beach Police Department, “the individual was coming back towards West Palm and didn't see the bridge arms coming down, it was suspected the guy was messing with his GPS." According to Salm, Montano is lucky the distraction didn’t cost him his life. 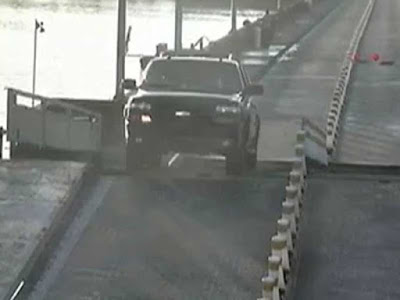 “The implications of what could have happened, had he hit at a different time or he hit the ramp and went over the side, you're talking about a potentially fatal accident," Salm said. And fortunately for Montano, his timing was impeccable. “You see the arms go down and then you see the vehicle just come in and he's hitting it just at the moment that it's starting to go up,” Salm said.

The Flagler Bridge was closed for about five hours on Saturday morning as crews worked to repair the traffic arm Montano ploughed through. According to a police report, Montano and his passenger were treated for minor injuries at the scene of the crash and Montano was cited for reckless driving.
Posted by arbroath at 6:07 am
Email ThisBlogThis!Share to TwitterShare to Facebook