Man claims to have found caterpillar with human face

Robert Palmer was giving his horse some water a few weeks back when he says he spotted a caterpillar with a human face looking back at him from the side of the trough. "My first thought was to crush it with my cane, then I thought, no, it looks so strange, I'm going to take a picture of it, " said Palmer, from Toutle, Washington. He has since been been asking experts about what type of caterpillar he’d seen.

"I'm going to be 70 in November. And I've never seen a bug with a human face staring back at me," said Palmer. Palmer would like to know what kind of caterpillar he's looking at. He'd done all the research he can. "I've sent the picture to OMSI, the Portland Zoo, Fish & Wildlife, the Extension Service, The Master Gardeners. People either don't respond or don't know what kind it is. Some people aren't taking this very seriously." He says he tried to keep the bug alive, but it has since died. 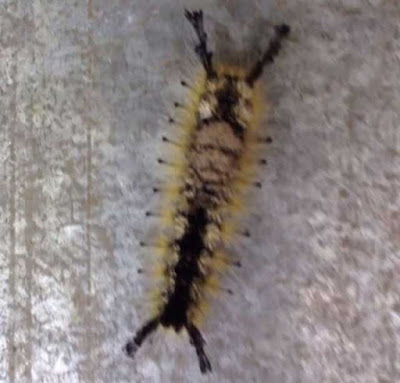 He guarantees the validity of the photo, however, saying he even took the caterpillar into town to show the folks at his local grocery store. "I sent a picture to my grandson, he said 'nice Photoshop grandpa'. I said I can't even use my smart phone half the time, much less do some special computer effects. I had to have the girls at the Shell station send the picture to the local TV station. He knows I wouldn't lie about this," said Palmer. The staff at Drew's Shell in Toutle back him up.

Others who know Bob Palmer, who's lived in the area for nearly 50 years, say he's the real thing. "It's Bob, he wouldn't lie about anything. He's just really intrigued by what kind of caterpillar it is, and getting somebody to figure it out, that's why he's always talking about it," said Kay Hanke, "One woman told it looks like the devil," says Palmer, "I decided to stay away from her, if she's sctually seen the devil. Haha."

There's a news video here.
Posted by arbroath at 6:07 am
Email ThisBlogThis!Share to TwitterShare to Facebook

First thing I saw was Robin Williams, but then I thought it looked like Poe, also.

Wait just a minute? Did no one see Jesus?

I really expected a Kafka joke you guys