The world record for the most gloves put on one hand in 60 seconds has been unofficially broken by a schoolgirl in Hull. 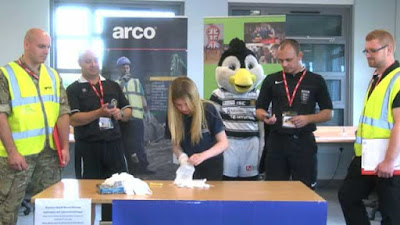 The previous world record was set in March 2011 by New Zealander Alastair Galpin, who wore 13. The new record is still to be verified by the Guinness World Records, which could take up to three months.

Darren Gardiner, assistant principal at the school, said: "The students are delighted to be part of this Guinness World Record attempt - it's a fantastic opportunity to make history."

You can watch Alishia's potentially record-breaking feat here and here.
Posted by arbroath at 6:01 am
Email ThisBlogThis!Share to TwitterShare to Facebook

Her parents must be so proud...

She can pass them all out to the teenage boys afterward.