Residents of a Dorset village were faced with the surreal sight of a boat left in the middle of a road after it was apparently abandoned by thieves. Villagers heard a crash at about 8:30pm in Spetisbury on Monday before they were greeted by the spectacle at the Tarrants crossroads. 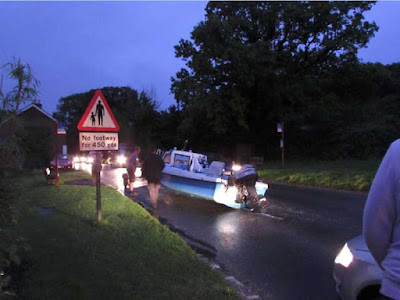 Bernie Ward, who discovered the boat outside his home, said: "We heard scraping, like tyres turning on gravel, which is what we thought it was at first because, with the rain we've had, there's a lot of gravel on the corner. But then we thought it was a bit louder than that, so we had a look out the window and, of course, we could see this boat in the middle of the road.

"We expected to see people wandering around thinking how are they going to get it back on their trailer, but there was no trailer or anything there. My next thought was they must have realised it had fallen off the back. But one of my other neighbours went up the road and saw the trailer had been dumped as well." 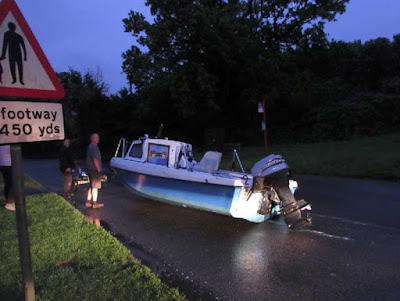 Several residents retrieved the trailer, which was 200m (656ft) further down the road in the direction of Poole, and called the police. At first it was unclear how the vessel came to be there but police later confirmed it had been stolen. Dorset Police said the owner of the boat had been found. A police spokeswoman said: "The boat and trailer were in the middle of the road and have now been recovered."
Posted by arbroath at 6:01 am
Email ThisBlogThis!Share to TwitterShare to Facebook