Dying dog given one last play in the snow

A cancer-stricken St Bernard dog has been allowed to play in snow just hours before she was due to be put down. Six-year-old Sophia was taken to the Chill Factore indoor ski centre in Manchester as her owner attempted to give her the perfect send-off. Alyson Page, 31, decided she wanted to give her pet the chance to play in the snow after Sophia was diagnosed with bone cancer two months ago. 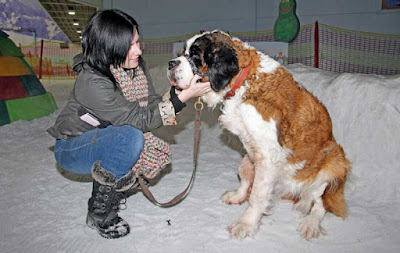 Mrs Page, who is from Leigh, Greater Manchester, said: "I had been searching for ideas for something to make the last time that we have got with her really special because she is such a special dog. She absolutely loves the snow, so I sent an email cheekily on the off-chance, I never expected them to be so kind to let us come and bring her. We got a reply and it was just before we were due to have her put to sleep, so it was just amazing. 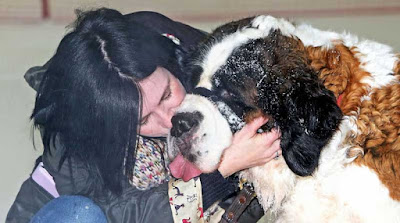 "She has not really shown any interest in anything for a couple of weeks now, so just to see her with a waggy tail and diving around in the snow has just been amazing. It's been a wonderful end for her." St Bernards, known for their enormous size, were originally bred for rescue and worked in the Swiss Alps and northern Italy. Mrs Page conceived her eight-month-old daughter through IVF and said the dog had supported her through the process. She added: "Sophia was my rock throughout stages of IVF treatment. We went through years of infertility, so she has been a big support for me and I wanted something special for her.

"We would have sold the car, we would have done anything to pay for treatment, but the vet advised us to just make her as comfortable as possible. She is a massive part of our life and I can't even begin to say how much we're going to miss her, but it has made me happy to know she has had a wonderful day today." Sophia was joined on the 180-metre ski slope by her half brother Yogi, a five-year-old St Bernard. Morwenna Angove, chief executive officer at Chill Factore, said: "We are huge dog people at Chill Factore, so we were pleased that we could do something to help on this occasion. All of the team came out to meet Sophia and seeing her so happy was our ultimate goal."
Posted by arbroath at 6:01 am
Email ThisBlogThis!Share to TwitterShare to Facebook

Thank you for the sweet story!