A koala that could not face rejection by a dairy farmer in Victoria, Australia, chased after her as she tried to escape its clutches on her quad bike. “He was in love with me and I rejected him so he chased me,” dairy farmer Ebony Churchill, 31, said. “The koala surprised me,” she added. 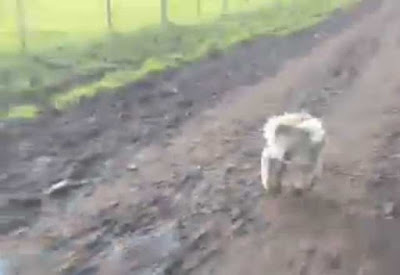 Ms Churchill, who lived in the Adelaide Hills for about 20 years, was moving a herd of cows on a property near Heywood, in western Victoria, when she saw the koala walking nearby. She assumed it was going from one tree to the next. “He was close but then he started running towards me and I thought I better speed up (on the quad bike),” she said. “But the more I sped up, the faster he got. 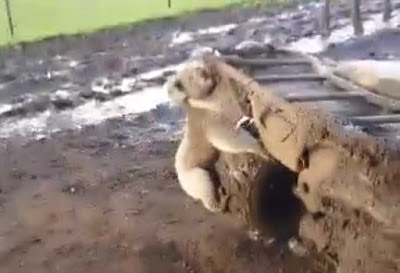 “I thought if I got further down the track, he would lose interest. I got to the end of the cows and couldn’t go any further so that’s when I bailed off the bike. They’ve got hard, sharp claws and I didn’t want to have him grabbing at my leg as I was on the bike.” Ms Churchill lost sight of the koala as she got off the bike but found it latched on to the rear tyre. “He sat on the tyre for a while and I didn’t want to upset him,” she said.

“I started herding the cows on foot and when I looked back, he had got off the bike and was walking away.” Ms Churchill said she was probably travelling at about 10km/h along the muddy track when the koala was chasing her. “They’re very active this time of year,” she said. “He was a gorgeous koala - really, really cute.” She said she had seen the same koala a couple of times and it had followed her from a distance but it was the first time it had tried to chase her.
Posted by arbroath at 6:06 am
Email ThisBlogThis!Share to TwitterShare to Facebook

Lordy.
She is ok herding cattle to their death, but let a little wee vegetarian bear come near her and she is wetting her pants with fear.

She is a dairy farmer, she was herding cows to milk them, not kill them!

I would so eat one of these; they can be vicious little gits. I'd also like to try horse or swan, but I don't think Her Majesty would be pleased, maybe somewhere in Europe.