Man attempted to chew off fingerprints in bid to avoid identification

A man is under arrest in Lee County, Florida, despite his attempts to chew off his own fingerprints in an attempt to not be identified. The Lee County Sheriff's Office says detectives spotted a 2015 Mercedes which had been stolen and stopped the vehicle. 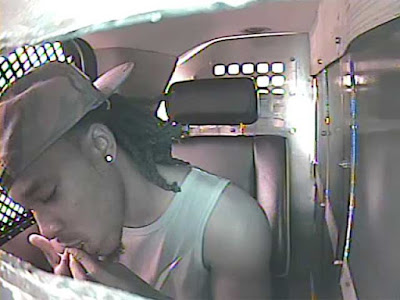 Detectives discovered that the driver, 20-year-old Kenzo Roberts, was using a fraudulent ID, had a concealed firearm, and possessed three fraudulent credit cards, according to Lee County Sheriff's Office.

As Roberts was being detained in the back of the patrol vehicle, surveillance video shows him attempting to remove his own fingerprints by chewing them off and rubbing them against the cage. The ploy wasn't successful though, as a fingerprint scanner quickly identified Roberts.

LCSO says he has two felony warrants for his arrest out of Broward County for aggravated assault with a deadly weapon. Roberts has been charged with three counts of possession of a counterfeit credit card, grand theft auto, possession of a concealed firearm, possession of similitude of a driver's license, driving while license suspended, and false identification given to law enforcement. Border Patrol was also contacted and found that Roberts was in the US illegally.
Posted by arbroath at 6:06 am
Email ThisBlogThis!Share to TwitterShare to Facebook

I wonder how far you have to go temporarily remove fingerprints