A man called West Yorkshire Police wanting to press charges against both his girlfriend and her cat. 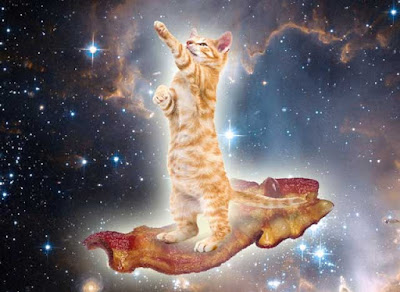 He accused his girlfriend of having allowed her cat to eat his bacon. 

Despite the call handler explaining that a cat eating bacon is not a criminal offence, the man seemed determined that someone was at fault.

Asked whether he would like to press charges against the cat or his girlfriend, the caller said, "Both of them," before being told that the police don't arrest cats.
Posted by arbroath at 6:00 am
Email ThisBlogThis!Share to TwitterShare to Facebook

So the cat stole his bacon.

Who stole his marbles?*

*on the left side of the Atlantic, "marbles" is occasionally a reference to "senses". Don't know about your side of the big blue.

Yes, 'losing your marbles' means the same thing over here too, Lurker111.

Want to really get into a fight? We can "table" the issue. ;)