A little dog in Phoenix, Arizona, found herself in a very sticky situation when she got caught in a glue board trap. Luckily animal rescuers were able to save her and clean her up. And it was peanut butter that saved the day. Glue board traps are trays coated with an extremely sticky adhesive. They are often used for rat traps. Any animal that touches one of these traps is immediately caught and immobilised, and physically stuck to the board. When Abby, a 4-pound Chihuahua/Yorkie mix, found herself stuck to one of those traps, Emergency Animal Medical Technicians (EAMTs) from the Arizona Humane Society were summoned to the scene. 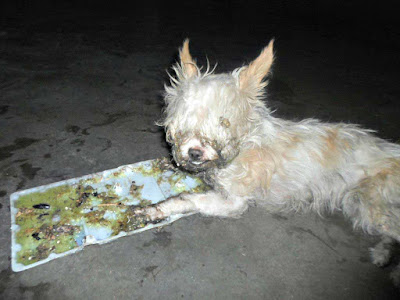 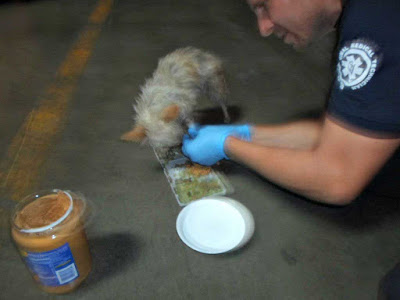 When the EAMTs arrived, Abby had already succumbed to exhaustion and was collapsed face down in the glue and was struggling to breathe, with glue lodged in her nasal passage and eyes. Had she not been rescued in time, she could've suffocated and died. “She was so exhausted and so out of it, she looked like she had passed,” says EAMT Andy Gallo. “The she took one breath. Just one breath. And I couldn’t believe it.” Knowing that simply peeling the trap off of the small dog's face would cause severe pain and could even rip out her fur and/or skin in the process, Gallo tried a more humane and creative approach. He lathered the little dog’s face with peanut butter and the peanut oil loosened the glue's grip. 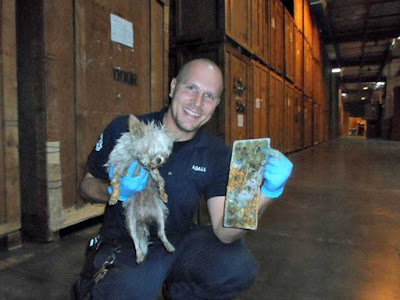 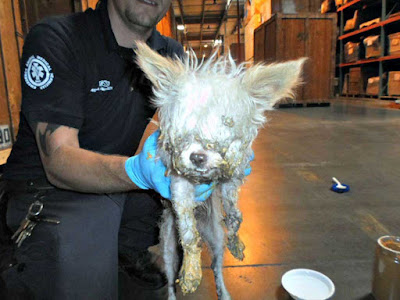 Gallo was then able to carefully and painlessly remove the glue from Abby’s small body. “She had pressed both her paws deep into the glue,” he says. “I guess she was trying to chew it off she had glue packed into her nostrils. It took a lot of work; a lot of peanut butter." The trouble is, little Abby was apparently hungry, too, and kept trying to eat the peanut butter. "As I'm using the peanut butter to get it out, she’s trying to eat the peanut butter," said Gallo. "She's in the worst situation possible and she’s still licking me and still was so sweet.” Abby’s face was cleaned up and groomed in the Second Chance Animal Hospital. After a few days of recovering (and the loss of a little fur), she was happy and healthy. 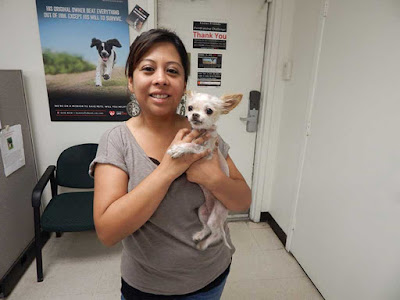 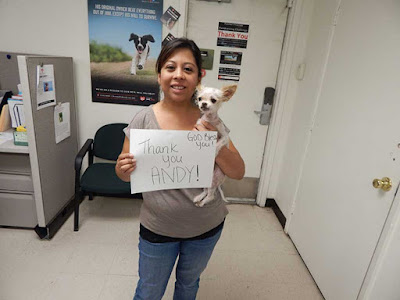 I turned out that Abby (whose real name is Mia), went missing about a month ago and her owner had been checking lost pet websites and searching shelters for her ever since. The woman had photos of Abby/Mia and lives nearby the warehouse where the dog was found. When the owner saw Mia in her kennel, Mia was all tail wags, and immediately recognised her. Shelter workers say she started jumping in her kennel and barking with excitement. She leaped out of the AHS employee’s arms and into her owner’s arms and started kissing her face and licking away her tears of happiness. Shelter workers describe it as a very emotional reunion. The owner had Mia microchipped before leaving the shelter.

There are two videos here.
Posted by arbroath at 6:07 am
Email ThisBlogThis!Share to TwitterShare to Facebook

Glad they rescued her.
These traps are the most cruel traps.
Anyone that uses them should be pushed on to a human sized one and just left.
Making any animal, be it rat, mouse, cat, rabbit or small dog suffer a death of torture and starvation is tantamount to evil.
Any person that doesn't go out of their way to get rid of these traps deserves to answer for their lack of action at the gates of hell.
I don't believe in killing or hurting any animal, but if you are going to do it, maybe for some strange personal reason like you don't think there should be other creatures on YOUR planet, for the love of all that's decent, do it humanely and quickly.
I hate humans more each day.