A Glasgow taxi driver has been banned from the road following allegations he asked female passengers to urinate in the back of his cab. The 55-year-old, who cannot be named for legal reasons, had his licence withdrawn by licensing chiefs after a complaint from Police Scotland.

It is claimed by the police that in April the man picked up a female passenger in the early hours on the city’s Queen Street before driving her to an unknown destination. It is alleged he told her he would waive the fare if she relieved herself in the black taxi. The passenger is said to have refused and later reported the incident to Police Scotland. 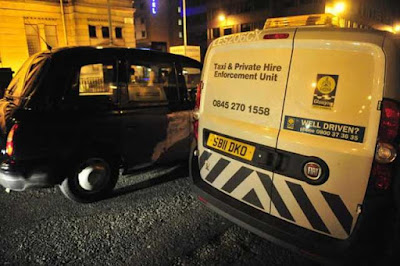 The force then claimed in late June, again in the early hours, he picked up a lone female outside a licensed premises in the Glasgow’s Virginia Street where he is then alleged to have driven her to an unknown location and offered a free fare if she urinated in the taxi. Again, the passenger refused and was dropped off in the city centre. She too made a complaint to the police. The driver has since been reported to the procurator fiscal under sections four and seven of the Sexual Offences (Scotland) Act 2009 in relation to both incidents.

No trial date has yet been set. As part of his bail conditions he is prevented from driving a taxi or private hire car. Police Scotland had requested the immediate suspension of his licence last month, with a meeting on Monday to decide how long this should be extended, if at all. During the licensing committee hearing, the driver said he would be pleading not guilty and asked that his licence be suspended only for a further four weeks. He said he mainly worked night shifts as his wife was pregnant and needed his assistance at home during daytime hours. He claims to have been a cab driver for 20 years and had never been in trouble.
Posted by arbroath at 6:03 am
Email ThisBlogThis!Share to TwitterShare to Facebook