Taxi firm boss surprised by cab transformed into can of Spam

When taxi company owner Mark Fleming arrived at work on Friday morning, he was surprised to see his beloved black London cab had been covered in tin foil and transformed into a giant replica can of Spam. 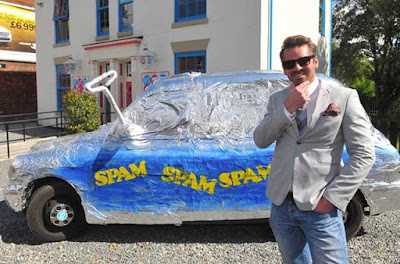 "I came into work first thing and I couldn't believe my eyes when I saw what had been done," he said. "It is completely covered in tin foil with the word 'Spam' stamped across it, and there is even a spade sticking out to look like a ring pull to open a can."

Staff at 65 Taxis in Hull said they saw two people acting suspiciously near the car at about 4.30am on Friday. They chased the men away from the car, but did not realise the extent of their prank until later. 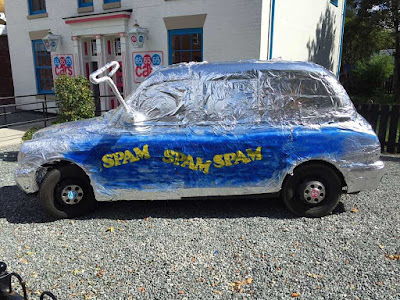 Mr Fleming said he has been racking his brain to work out who might have masterminded the joke. He believes it could be the handiwork of a local guerrilla street artist. "I actually really like it, and I am the sort of person who can see the funny side, but I have got to admit that I am just a bit confused about who has done it and why."
Posted by arbroath at 6:01 am
Email ThisBlogThis!Share to TwitterShare to Facebook