When passing through security at Dublin Airport in Ireland, a Minion fart gun was seized from a young boy and taken away on Saturday. 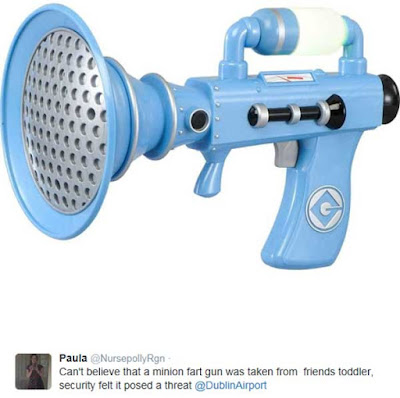 The security officers claimed it was a 'threat' and took the toy gun, which makes fart noises and emits a banana like smell when fired, away from the child.

Paula Morrin, a friend of the toddler's mother, Dáire Fitzpatrick, tweeted: "Can't believe that a minion fart gun was taken from friends toddler, security felt it posed a threat." Dáire Fitzpatrick was returning to the UK from Ireland with her son, Leo. 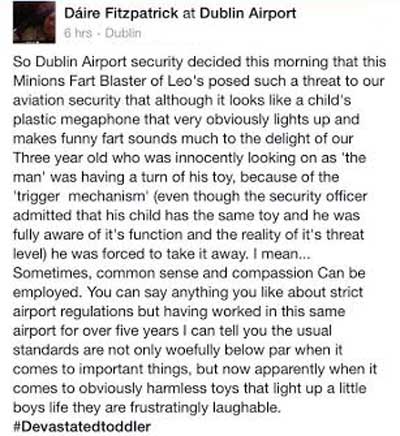 However, when she and Leo went through security the officers demanded that the boy hand over the Minion-themed fart blaster. In a Facebook post, Dáire explained that the trigger mechanism was against policy and had to be removed. Paula has since demanded that Dublin Airport security return the toy to Leo as he's heartbroken without it.
Posted by arbroath at 6:03 am
Email ThisBlogThis!Share to TwitterShare to Facebook

As Arthur C. Clarke said: Any sufficiently advanced technology is indistinguishable from magic. I guess the creatures they've got working for
security pantomime are so tragically undeveloped the magic of the fart gun strikes terror into their tiny minds and they must destroy what they can't understand.

Actually, if that was going to be taken into an airplane, I'd've been more worried that the weapon carried the threat of annoyance.

The shi**y toy has a banana-scented liquid which can not be removed (or refilled) which I am guessing is the problem here.
Sad that this is even an issue