A woman was surprised when she found a giant dog had been drawn on her conservatory door by a slug. 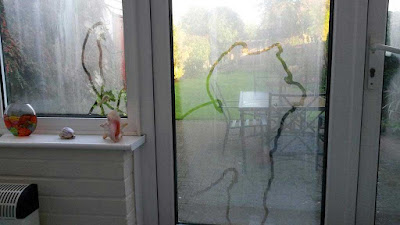 The artistic creature left the trail on the door of Ann George, from Kennington, Kent.

Mrs George said: "I spotted it on the conservatory window and thought it was a bit different." Ann said the slug's masterpiece saved it from death. 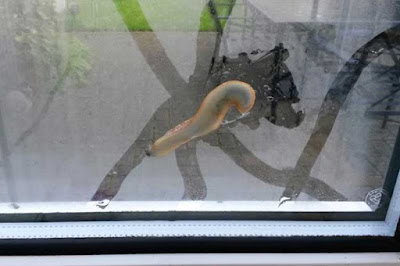 She added: "The artistic slug nearly had salt poured on it but after I realised what it had created I thought I'd leave it alone."
Posted by arbroath at 6:00 am
Email ThisBlogThis!Share to TwitterShare to Facebook

i used to pour salt on slugs and snails, but then grew up, grew a brain, and realised they do not deserve to die just because we think they are ikky.
Get some compassion, let creatures live.

For reasons known only to themselves, we get slugs on our second-floor balcony.