A market trader in Hampshire set up his stall around an illegally parked car. Parked outside the Original White Hart in Ringwood, the white Vauxhall, sporting 2014 number plates, was occupying a space used for the town’s weekly market day. There are signs clearly stating that no parking is allowed after 6am and a traffic warden dispensed a penalty notice

Unable to locate its owner, at 9am, the trader erected his clothes rails around the vehicle and attempted to continue business as usual. The market’s organiser, Edward Morant, said in more than 20 years of running the day he has never seen anything quite like it. “We went round all the pubs to find out if they had anyone staying overnight,” he said. “But there was no sign of the car's owner. 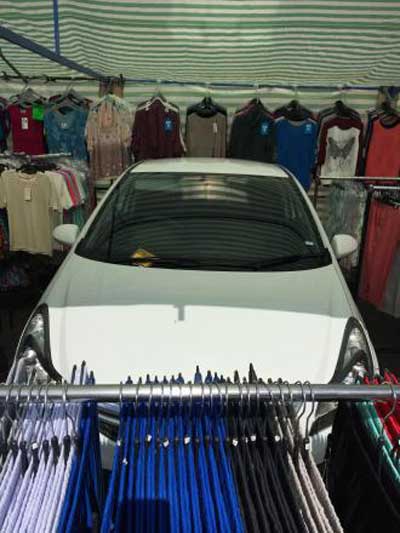 “It is not unusual for cars to still be parked there at 9am, sometimes people leave their cars after a night in the pub - but this one stayed there all day. The traders can’t just wait for them to be moved – they have to get on with their day’s trading. “t is a real nuisance. The trader was not in the least bit happy – it is their livelihood.”

He added that the car’s presence meant one quarter of the trader’s stall could not be opened at all. Passer-by Brian Case spotted the unusual sight while he was on his lunch break, taking a picture on his phone. “I had to do a double-take,” he said. “The trader asked me if it was mine. He looked very grumpy about it.” Mr Case said the car remained parked on the road after the trader packed up for the day at 3pm.
Posted by arbroath at 6:00 am
Email ThisBlogThis!Share to TwitterShare to Facebook

Should it not have been towed away?

@PattyO'Heater, you took the words out of my keyboard.