A man who handed over £500 in the street for two new iPhones was left disappointed when he discovered he had been sold a bag of sugar. The victim was fleeced by a street trader in Manchester city centre at around 3pm on Monday. 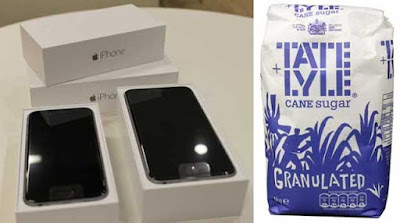 He was walking through Piccadilly when he was approached by a man, who offered him an iPhone 6s. The would-be-customer struck up a deal, withdrew £500 from a cashpoint and handed it over for two of the devices.

After money was handed over, the street trader swiftly left and when the man opened his purchase he found only a bag of sugar. GMP City Centre tweeted: “Another day, another scam. Man hands over £500 for two iPhone 6s in Piccadilly and is now the lucky owner of a very expensive bag of sugar.”

Inspector Phil Spurgeon added: “We’d like to remind people that if a deal seems too good to be true, it usually is. You’re either buying a fake or stolen article, or something completely different.”
Posted by arbroath at 6:02 am
Email ThisBlogThis!Share to TwitterShare to Facebook

Pig in a poke. The oldest scam in the book and idiots still get caught our by it. Beggars belief