A driver on his way to pick up brake fluid smashed into an auto parts store in North Park, San Diego, on Monday, shattering the glass door and crushing multiple displays inside. 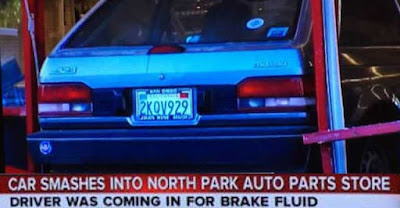 The man in his 80s became trapped when he drove his 1989 Mazda all the way into the O'Reilly Auto Parts. "I hear a car come up and he's going awfully fast and ... a little faster than you would if you're pulling into a stall," said witness Christopher Rojas Franklin.

He said he had just left the store and was working under the hood of his vehicle when he heard the crash, looked up and saw a cloud of smoke inside the store. One person inside had to dive  out of the way when he saw the car coming towards him.

When rescuers pulled the driver out, they discovered the man was not injured. Police drove him home. "He was moderately coherent," Franklin said of the driver. "He was talking. He needed to get home immediately." The store was left with significant damage.
Posted by arbroath at 6:06 am
Email ThisBlogThis!Share to TwitterShare to Facebook