Thieves stole a wooden sculpture hours before its official unveiling. The sculpture crafted by award-winning wood carver Simon O'Rourke, depicting the book character Tattybogle from the series by children's author Sandra Horn, was due to be unveiled to children from the Early Years Centre in Wrexham, north Wales, on Friday.

But sadly, thieves stole the scarecrow sculpture sometime between 6pm on Thursday and 8am on Friday, leaving just an empty space. The £2,000 sculpture was funded with money awarded to Wrexham Council by Natural Resources Wales. The two-metre high solid oak sculpture was set in fast-drying concrete on Thursday afternoon. 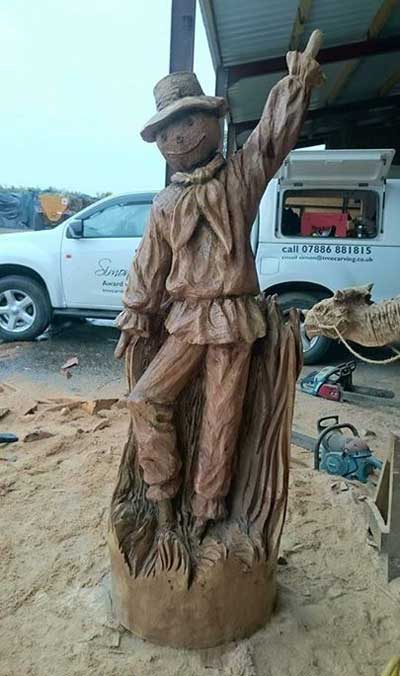 Mr O'Rourke said: "I'm really disappointed. It's just such a real shame that there's people who would do something like that. It was solid oak, and it would have been a four-man lift, so it probably weighs about half a tonne. And they've really gone to great lengths breaking up the three feet of concrete we put under it.

"There's a security camera right next to it, but I don't know what range it is - we'll have to wait and see footage." He added: "It's so distinctive and unusual. I can't imagine it would go unnoticed if it turns up in someone's front garden. It would be really good to get it back." North Wales Police confirmed that they are investigating the theft of the sculpture.
Posted by arbroath at 6:03 am
Email ThisBlogThis!Share to TwitterShare to Facebook