A Florida woman was arrested on Thursday after allegedly stealing her boyfriend's teeth and prescription drugs, then filing a false police report because he had upset her, police said.

According to authorities, Felicity Leigh Palma, 44, called police to report a burglary in progress in Port St. Lucie on Thursday evening. She told the officers she saw "two dudes" running from her home, and that her jewellery and money had been stolen, an arrest report said. 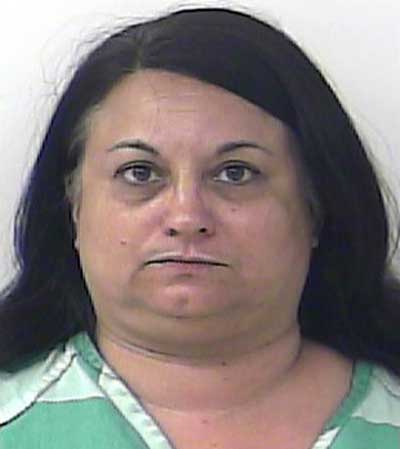 Palma's boyfriend told to police that two of his prescription drugs and a pink case containing his false teeth were also missing. As police were investigating, her boyfriend brought over a bag to police that he had found inside Palma's car and dumped the contents onto a table. Out spilled the pink case containing his false teeth.

Palma then stated that he was trying to frame her. Police then noticed the missing prescription drug bottles belonging to her boyfriend inside a purse Palma was carrying. Palma told police that she fabricated the entire incident because she was mad at her boyfriend and wanted to show him how easy it would be for someone to steal from him. She was booked into the the St. Lucie County Jail.
Posted by arbroath at 6:06 am
Email ThisBlogThis!Share to TwitterShare to Facebook