A woman, who admitted to smoking meth and drinking alcohol, was arrested after allegedly ramming her truck into a car, breaking a window with a hammer and attacking a police officer with a Batman doll.

A police officer was dispatched at about 9:20pm on Saturday to a home in Lebanon, Missouri, where it had been reported that there was a motor vehicle accident and a disturbance. 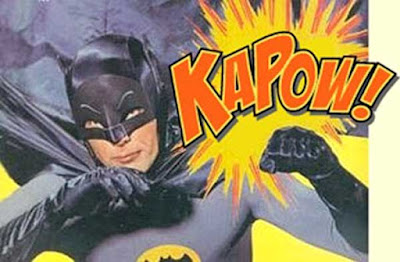 The incident started when the woman's truck struck a car, leading to a confrontation between the drivers. This allegedly led to the woman breaking the man’s back window with a hammer. When the officer arrived, a Dodge Dakota was crashed into an Acura.

The driver of the truck, a 46-year-old Lebanon woman, was lying on the ground in front of a residence, according to an LPD incident report. The woman was lying in a flower bed, holding and talking to a 3-foot tall Batman doll. As the officer approached, she told the doll to be quiet. When the officer told her she was under arrest the woman then allegedly struck him with the doll.
Posted by arbroath at 6:07 am
Email ThisBlogThis!Share to TwitterShare to Facebook