A ginger tom-cat has undergone a full body shave after he was found covered in concrete from nose to tail in what is believed to be a malicious attack. The two-year-old moggie, nicknamed Grant, was shorn by vets after it became impossible to wash the building material from his matted fur. Concrete powder, which is toxic for cats, had even found its way in to Grant's eyes making, them irritable and difficult to open. Thankfully the little cat is making a good recovery, but vets are concerned that he may have been targeted by cruel persons playing a sick joke. Grant was found huddled on the doorstep of Faye Richards' house in Withywood, Bristol, on Thursday. She said: "At first I thought it was a screwed up ball of brown parcel tape that had been blown onto my front step. 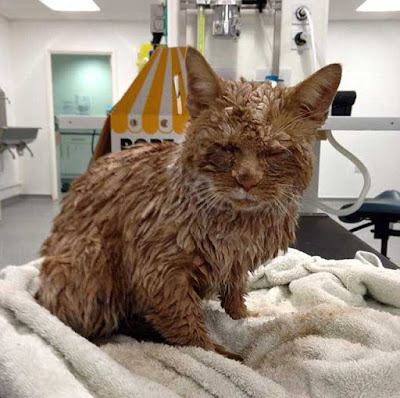 "It was only when I got closer I realised it was a cat. It had started to go rock hard on his back, but his belly was still soaking wet and he could barely open his eyes." Faye rushed him to 'The Vet' surgery in Hengrove, where she takes her three cats. Recognising the serious nature of his condition, vet Adam Sheridan immediately started work to remove the drying clumps. He said: "Most of his top coat was covered in concrete and it was matting together. We attempted to groom as much out of the fur as we could, but we had to take the decision to shave him. We didn't want to bathe him as baths can be very stressful for cats, and we didn't want to move the concrete on to his skin or close to his mouth because of the minerals within it. 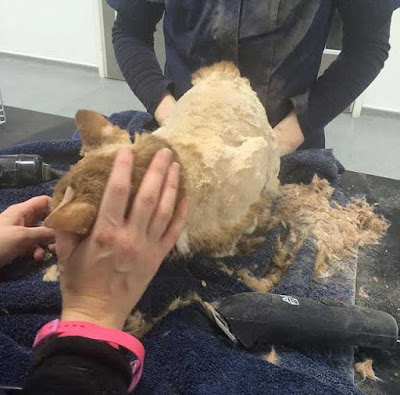 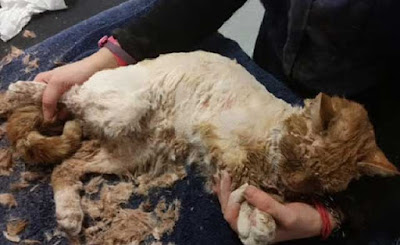 "Our biggest fears are if he has ingested or inhaled any of the concrete. He has gone to the toilet, but we can't tell if any of the powder has got in to his lungs yet. It is a case of waiting to see any signs." He is hopeful that the tom-cat will make a full recovery, and he even took Grant home to nurse him over the weekend. "He is an adorable cat," Adam said. "He was very subdued and quiet when he first came in, almost certainly due to the trauma. But he has made big improvements over the past couple of days. He is very friendly and charming, and has mostly been catching up on his sleep over the weekend. We have got most of the concrete off, but there are still little clumps which we can't get to yet." 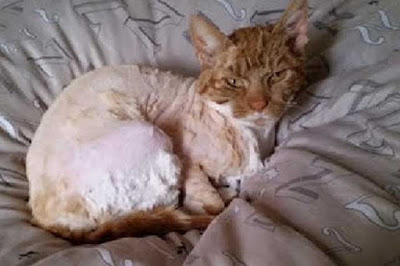 Sadly, Adam believes Grant may have been targeted for the concrete-dunking. He said: "Myself and the other vets are suspicious as to the cause of it. "Grant did not have any concrete on his paws and the pattern of the concrete on his fur looks like it was poured over him as is has moved from the top to the bottom of his body. "Cats are not normally attracted to wet concrete, because of the soft feel of it they find it quite unsettling." So far several people have come forward to claim Grant, but the surgery want to make sure he is returned to the right home. "He is the sob-story cat and we have had a lot of people say either he is theirs or that they want to adopt him," Adam said. "We are just in the process of figuring out who he belongs to and whether it is safe for him to go back. We will definitely make sure he goes back to a good home."
Posted by arbroath at 6:01 am
Email ThisBlogThis!Share to TwitterShare to Facebook

What is wrong with people? Why would anybody do that? How could they even think of it?

Poor Grant! How far removed from your humanity do you have to be to do something like that?

Unbelievably cruel, just don't understand how so-called humans can be so evil. I hope the poor cat makes a full recovery.

Let's dunk the perpetrators in concrete and not help them :)