The Registry of Motor Vehicles has allowed a Massachusetts woman to wear a spaghetti strainer on her head in her driving licence picture as an expression of her “Pastafarian” religion. Lindsay Miller fought the RMV to wear the metal headgear as a sign of her religion. The RMV does not allow drivers to wear hats in their pictures, unless it is for a medical or religious purpose. Miller won her appeal with the RMV thanks to the help of an attorney associated with the American Humanist Association. 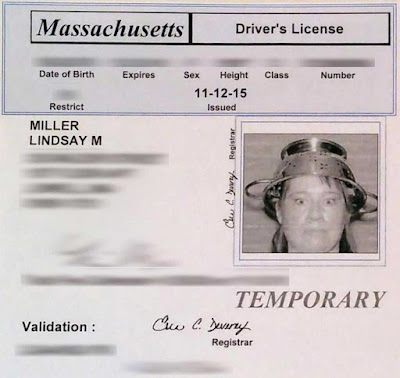 “As a member of the Church of the Flying Spaghetti Monster, I feel delighted that my Pastafarianism has been respected by the Massachusetts RMV,” Miller said. “While I don’t think the government can involve itself in matters of religion, I do hope this decision encourages my fellow Pastafarian Atheists to come out and express themselves as I have.” When Miller initially applied for her driving licence, she was denied the ability to wear the colander.

A friend of Miller’s contacted the American Humanist Association on her behalf, and the group helped file an administrative appeal. Miller was due to attend an October hearing on the subject, but it was postponed and the RMV opted to let her obtain a drivering licence wearing the colander on Thursday. The American Humanist Association said Pastafarians believe the existence of a Flying Spaghetti Monster is “just as probable as the existence of the Christian God.” 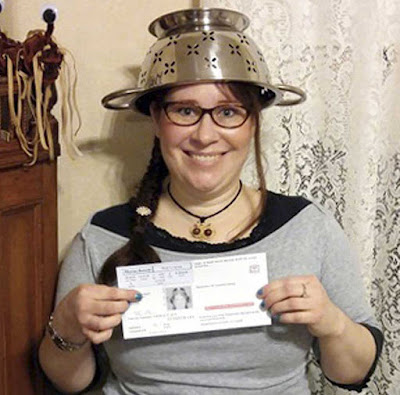 “The First Amendment applies to every person and every religion, so I was dismayed to hear that Lindsay had been ridiculed for simply seeking the same freedoms and protections afforded to people who belong to more traditional or theistic religions,” said Patty DeJuneas, a member of the Secular Legal Society, which works with the American Humanist Association. “We appreciate that the RMV recognised the error, apologised, and issued a licence respecting her First Amendment rights, and hope that RMV staff will be trained to respect diversity.”

Good on the MRMV for recognizing the legitimacy of His Noodly Apendage!

That's the first time I ever heard the rationale behind the Flying Spaghetti Monster. Makes more sense now. Thank you.

I wonder if, in part, she was trying to make the point that "religious exemptions" for the no-hats rule should not be limited to Muslim-American women in hijab.

PS: As far as I know, the FSM originated on Creation/Evolution debate forums. There is a certain type of Christian Apologist who will say to atheists/agnostics: "Can't you try to be a little bit open-minded about the possibility of a Supreme Creative Intelligence behind the Universe?" When the non-believer admits, "Yes, there is something awe-inspiring about the idea of a Deity smart enough to invent DNA, even though I don't personally subscribe to that theory," the Christian pounces and says, "AHA, the name of the God Who Invented DNA is Jesus Christ, only begotten Son of the Father, and he wants to be your LORD and Personal Savior -- here, take this free pamphlet...."


Since then, "Pastafarianism" has branched out, of course, and is not strictly about spoofing creationism.