Police investigating a theft from a shop in south London have issued CCTV footage of a man they are keen to identify. 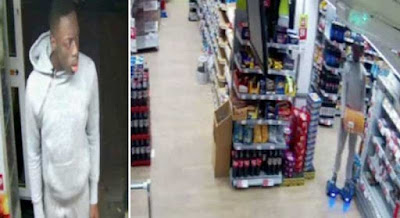 Police were called on Sunday to a report of a man who had entered the Co-op supermarket on Streatham Road, Mitcham, on a hoverboard. 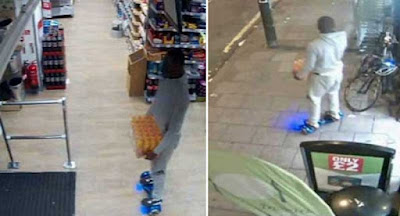 He entered the store at 21:43pm and took a case of Lucozade from the drinks aisle, making off without making payment.

CCTV from the store captured the man’s movements in and out of the store. He is described as a black man and was seen wearing a grey tracksuit top and bottoms. Police are keen to hear from anyone who may recognise the man.
Posted by arbroath at 6:00 am
Email ThisBlogThis!Share to TwitterShare to Facebook

It is not a hoverboard.
It has wheels.

Well he better not be on an airplane!