Burglars broke into an amateur football club's cafe and cooked burgers on a griddle before leaving a "thank you" note scribbled on the wall. The thieves also stole around 10 bottles of spirits from Colne Football Club's clubhouse in Colne, Lancashire. Volunteers found the message that read, "thank you burgor (sic) was great" before signing off with "Joey back at it" and a smiley face.

Club treasurer Janette Harries said she hoped police would catch the culprits. She said: "It's cheeky; they are rubbing our noses in it. Whether they are dumb enough to write their real name, you can't tell. They got the burgers out of the freezer and put them on the griddle and defrosted teacakes; they even used oil on the griddle. 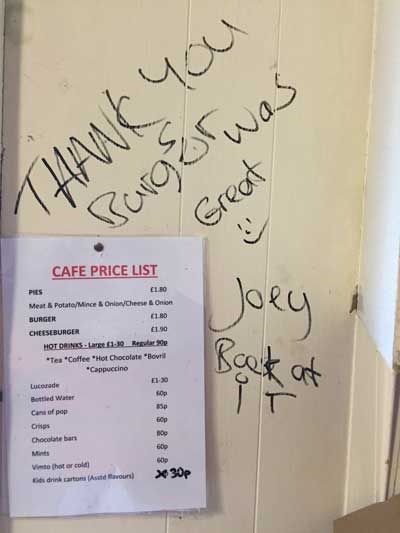 "So they have been quite considerate. But he didn't wash up afterwards." The theft happened sometime between 7:00pm on Saturday and 10:00am on Sunday after the club was locked for the night following a game. After prising off metal sheeting to the cafe, the offenders smashed their way into the clubhouse, making off with unopened bottles of spirits which they wheeled away in bins.

Mrs Harries said: "We are all unpaid volunteers and the club is not for profit; any money we make we reinvest in the club, and this is diverting what we have away from developing and advancing the club. It's very frustrating." She estimated that the break-in, the third in just over a year, has cost about £1,000. In September burglars broke in and sprayed milk over walls and again stole spirits.
Posted by arbroath at 6:00 am
Email ThisBlogThis!Share to TwitterShare to Facebook