A business owner has been left "shaken" following an unprovoked attack with a pot of yoghurt. Alison Nurton, founder of haberdashery store Butterfly Bright, was arriving at her new premises on Cheap Street, Sherborne, dorset, to teach a crochet workshop at around 7.05pm on Wednesday, January 20, when a yoghurt was thrown at her and the entrance to the shop.

She said: "As I was unlocking the door I heard a loud bang and felt something splatter in front of me, I thought it was an egg at first and then I saw the broken yoghurt pot on the floor and realised that I was covered in yoghurt. It was all over the door, pavement and wall of the shop entrance as well. 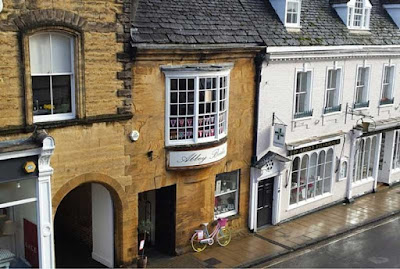 "I turned around to see a convertible car with its roof down disappearing off down Cheap Street. I wasn't able to get the registration as I was in such shock. Two young boys were walking up the road and heard me calling out after the car and realising I was in some distress stopped to ask if I was alright and if they could help at all but all I wanted to do was to get inside and lock the door behind me.

"I was very shaken and angry as it was dark and the whole incident was frightening and quite upsetting. It seems it wasn't an isolated incident as another yoghurt pot was seen on the pavement outside the Crown Pub on the A30 the same night. I just hope someone more frail than me was not left in a worse state than I was after such an unnecessary and childish prank." A spokeswoman for Dorset Police said she was unable to comment on the incident at this time.
Posted by arbroath at 6:00 am
Email ThisBlogThis!Share to TwitterShare to Facebook

this isn't the first time a hooker was creamed on Cheap Street!