Dispatchers for emergency services are often subject to a lot of very strange calls, but when Brandon Muir called to tell them that a parrot had flown into the cab of his truck approximately 50 kilometres northwest of Toronto, Canada, they said it was a first for them. “It’s kind of outrageous to hear the whole story, really,” Muir said with a laugh. Because it was unseasonably mild, Muir had his passenger side window down and all of a sudden heard an unusual fluttering sound on the window, which turned out to be the sound of wings flapping. “I looked up, and there was a parrot standing on the outside edge of my pick-up truck!” he explained. 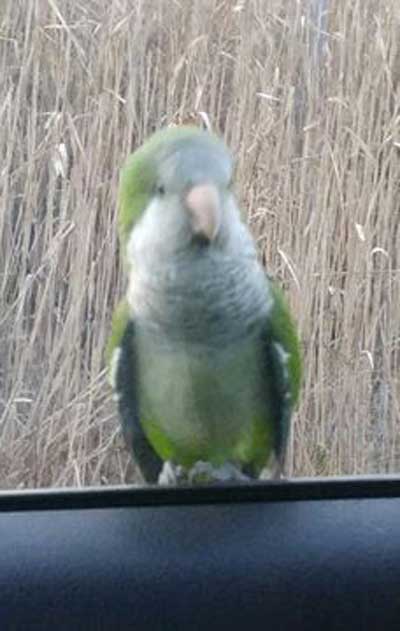 “He stepped right inside.” Given that it was clearly an exotic bird that was likely someone’s lost pet, once in the truck, Muir slowly put the window back up and ruffled the bird’s tail feather in the process. “So that prompted him to get onto the steering wheel,” he continued. “He seemed extremely content, like, ‘Thanks! Let’s go!’” Unsure of what to do with his unexpected new guest, Muir simply called 911 in hopes of being redirected to the police or animal control. “They forwarded me to the Caledon dispatchers and I told them they were going to think I was crazy and then explained the situation.” 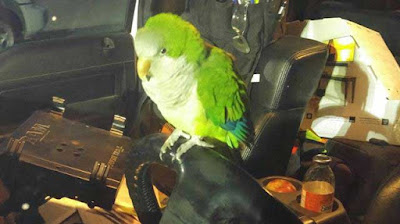 After a long pause, the dispatcher admitted that it was definitely the first time they had heard reports of a parrot knocking on car windows, and ended up putting him in touch with an after hours Animal Control officer. While Muir brought his new friend to the shelter to meet the officer, his wife also managed to track down a few Facebook groups for lost birds and were able to find a match. Turns out the little green feathered beauty is a three-year-old female Quaker Parrot named Baby who had escaped out of her owners home in Bolton, Caledon, for the first time in her life three days earlier. The Dedonato family has had her since she was a few months old, and when their youngest son, Roman opened a door, Baby decided that she was going on a grand adventure. 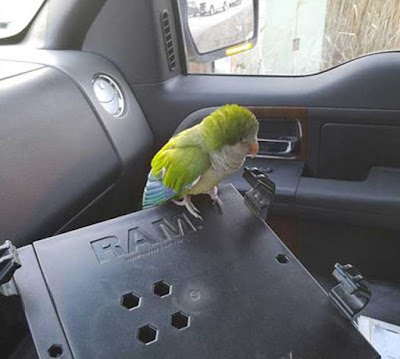 “After she flew out the door, we were looking for her everywhere,” Roman explained. His older brother had even climbed up on a neighbour's roof, got about a foot away from Baby, and she flew away again. Roman’s mother, Carol, explained that while Baby doesn’t often approach strangers, she must have been pretty hungry by the time she found her way to Brandon, and she couldn't be more grateful to him for returning her safely. "It's amazing the way that it all worked out, he (Muir) was at the right place at the right time and someone else might have just shooed her away," she said. "I can't even begin to tell you how grateful I am that he did what he did. Without him, she probably wouldn't be here today." “It’s a miracle. We’re so happy to have her home,” Roman concluded.
Posted by arbroath at 6:04 am
Email ThisBlogThis!Share to TwitterShare to Facebook

My Quaker Parrot (Same Parrot as the one in the post) named, "Zeus" flew out our backdoor one evening when my mother had opened the backdoor while the bird was out of his cage. We had seen and heard Zeus up in the trees for a few days and then he was gone. For close to three weeks he was gone without a trace... That was until we posted a picture of him in a pet store and a local family had caught him in their backyard in a bird feeder. They returned him to us and we gave them a nice reward in turn. We were glad to get him back and it was very much a miracle. In the open world you would think a creature so small and fragile would just be gone!