A man whose butt crack was hanging out his shorts was caught on surveillance video robbing two people at gunpoint in Fort Lauderdale, Florida. 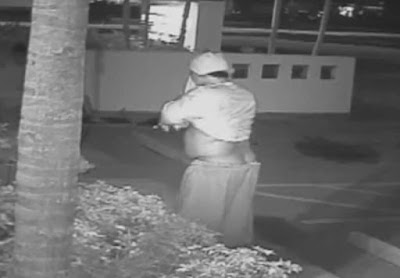 A police representative said newly released video of the incident that happened last August shows the man and an accomplice getting out of a vehicle.

He then robbed two people who were hanging out in the area. The men then drove north in what appears to be a white Chrysler 200, detectives said.

Authorities did not immediately disclose what was taken from the victims. Anyone with information about the identities of the robbers is asked to call Fort Lauderdale police.
Posted by arbroath at 6:07 am
Email ThisBlogThis!Share to TwitterShare to Facebook

Buttcrack? Look at the local WalMart. You'll find him.