A Silly String incident at a Walmart store in Michigan has resulted in retail fraud charges against a couple who made a mess with the canned string. The Muskegon couple entered the store outside of Ludington and commenced to get in a "fight" with the Silly String, said Mason County Sheriff Kim C. Cole.They allegedly ended up emptying "multiple" cans of the string, which comes out of an aerosol can, in multiple aisles of the store, Cole said.

"It sounds like they did make quite a mess," he said. Employees of the store demanded the couple pay for the cans they used, Cole said. "They opted just to leave rather than pay," the sheriff said. And so a sheriff's deputy responded, catching the couple nearby and throwing them in jail for retail fraud. 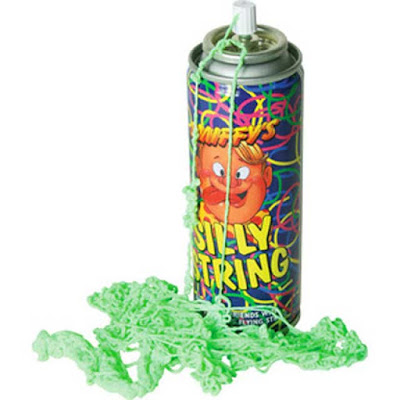 Free on bond are Samantha Christiansen, 26, and Derek Gomez, 24, both of Muskegon, according to the sheriff's office. "They're certainly old enough to know better," Cole said. Misdemeanor third degree retail fraud, stealing products worth up to $200 from a store, is punishable by up to 93 days in jail or a fine up to $500 or three times the value of the items taken, whichever is greater. Silly String sells for about $3 a can.
Posted by arbroath at 6:07 am
Email ThisBlogThis!Share to TwitterShare to Facebook